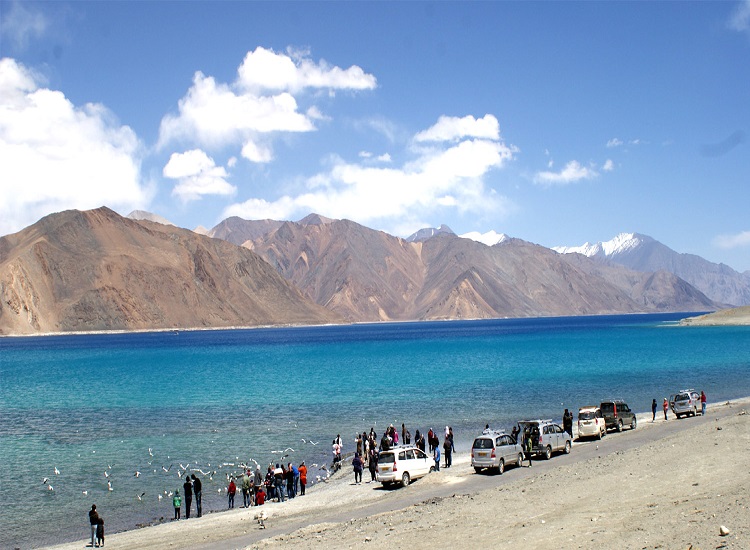 The most popular tourist attraction in Ladakh district is located in Hemis. The Pangong lake is a landlocked lake which is situated at a height of 4350 metres. It is also known as Pangong Tso. It is 12 kilometres long in length and extends from India to Tibet at a stretch. Approximately 60% of the Pangong Lake lies in the Tibetan Autonomous Region. A unique feature of this lake is that it does not remain blue throughout the year or even a day as matter of fact, rather it changes its colours from azure to light blue to green and grey as per duration. It is widely known amongst tourists as Ladakh lake and is the same spot where the superhit Bollywood movie “3 Idiots” was shot.

Shey Monastery or Palace is an ancient monastery present in Ladakh. The spot once served as the summer capital of Ladakh but now is mostly in ruins. It is located on top of a hillock and thus offers a stunning panoramic view. The main highlight of the monastery is the 39ft tall Shakyamuni Buddha statue present over there. One needs to take special permission to visit the monastery. The best time to visit the monastery is considered during the Shey Rhupla and Shay Doo Lhoo festivals which are celebrated in July or August. The Shey Palace was originally built in 1655 by Deldan Namgyal who was the king of Ladakh, in memory of his late father.

Khardung La, popularly known as Khardzong La, is one of the highest motorable roads in India. It is at an elevation of 5602 metres and provides charismatic scenery. The road also serves as the gateway to Shyok and Nubra Valley. Though to travel an inner line permit is required to visit. The road remains closed from October to May.

The Shanti Stupa is a white-domed Buddhist monument which is popular among all Indians. It is a religious place for Buddhists and is known to hold the relics of Buddha. It was consecrated by the 14th Dalai Lama. The stupa looks exceptionally beautiful during the full moon night with an additional charisma of light. Shanti Stupa is a perfect getaway for both looking to obtain peace from offering prayers to God and those waiting to get mesmerised by nature’s fascinating beauty.

The Chadar Trek also known as the Frozen River Expedition is one of the most unique and challenging treks present in India. The 6-day long Chadar trek across the frozen Zanskar River in Ladakh takes place during the end part of January till the end of February or sometimes even in the first week of March.  The Chadar trek is ideally located in Zanskar.

The Tanglang La is a high mountain covered road which is located on the Leh-Manali highway and is about a few kilometres away from Leh. It is situated at a height of 5,358 metres, and is the second-highest mountain pass after Khardung-La Pass. It is also known as the 12th highest motorable pass. The past summit of Tanglang La is breathtaking and is admired by a number of prayer flags.

Lamayuru is a tiny village popularly known as the Moonland of Ladakh due to its characteristics. It is widely popular for housing the Lamayuru Monastery which is the oldest and largest monastery in Ladakh. The location is an ideal breakpoint between the Kargil-Leh route.

The Changthang Wildlife Sanctuary is situated at an altitude of about 4000-9000 feet in the Ladakhi Changthang Plateau. There are a vast range of exotic flora and fauna that attribute the sanctuary to be the second-largest nature reserve. The wildlife sanctuary houses the three popular high altitude lakes of Ladakh Tso Moriri, Pangong Lake and Tso Kar.

Nubra Valley is located in the union territory of Jammu & Kashmir, and is at a distance of around 140 Km from Leh. The spot is famous for the Bactrian camel rides, orchards, beauty and monasteries. It is surrounded by snow-dusted Himalayan mountains all around, and can be reached through Khardung La.

Almond Nutritional Benefits: What Are Their Benefits?

Seven Exclusive Things To Do In Jim Corbett National Park

5 Best Winter Treks In The Himalayas

Tips and Tricks To Cheap Las Vegas Vacation Packages
What Are The Various Benefits Of Using a Roller Planter For Growing Your...
You Need to Ask These Important Questions Before Franchising Your Company

Tips and Tricks To Cheap Las Vegas Vacation Packages
What Are The Various Benefits Of Using a Roller Planter For Growing Your Plants?
You Need to Ask These Important Questions Before Franchising Your Company
iCloud Bypass Official The Best Online Tool in 2022